If you travel outside the U.S., you can legally bring back Cuban cigars. And smoke them here, too. (It’s a no-no to buy or sell Cubans in the States, however.)

Not a globetrotter? Head to Europe with Boveda’s International Relations Executive Benjamin Patock to learn:

Before he was in the industry, Benjamin Patock was a cigar hobbyist, just like you and me. His first cigar? A Romeo y Julieta Churchill while on holiday with his family in Cuba. (Not a bad first light.)

Fast forward a decade or so. The Frankfurt native was dissatisfied with the online cigar shopping experience for Europeans. So the entrepreneur teamed up with some folks primed to create an e-commerce company. Together, they launched Noblego in 2011. The Berlin-based online marketplace provides first-class service and in-depth product details for shoppers of premium cigars and cigar accessories.

Today Noblego is the second biggest online retailer for premium tobacco in Germany. And one of the fastest growing companies in the history of the local cigar industry, which is in a highly regulated market. For more than five years, Benjamin was Noblego’s CEO. But in 2017, he brought his expertise in the international cigar biz to Boveda. Now Benjamin is expanding Boveda’s presence outside North America. He knows the importance of 2-way humidity control because he was a customer long before he was our colleague.

“I use Boveda because it’s so easy. So perfect. And because I’m such
a lazy guy when it comes to cigars. I don’t like to refill and spill
and all those things. I want something that’s effortless.”

How’s your German? Benjamin is the author of a best-selling beginner’s guide to cigars. Published in 2015, this cigar primer coaches newbies on buying, storing and enjoying cigars. And features interviews with some of the cigar greats, including Axel-Georg André, Litto Gomez, Rocky Patel, Heinrich Villiger and the late José Orlando Padrón.

Benjamin is also the managing director of SaveCigars.org, an advocacy group for cigar enthusiasts in the European Union. He regularly speaks on protecting the rights of adult cigars smokers.

What are Rob and Benny smoking in Box Press Ep. 05? A Cuban, of course! A Swiss exclusive Vegas Robaina Edición Suiza from 2013.

How to tell if your cigars are really Cubans

How’s your Spanish? Printed on the bottom of a box of Cuban cigars, you should see:

Over their authentic Vegas Robainas, Benjamin and Rob discussed some real myths and truths about Cuban cigars.

MYTH #1: CUBAN CIGARS ARE MORE POPULAR IN EUROPE BECAUSE CUBANS ARE BETTER CIGARS

Cuban cigars are more popular in Europe than the United States because unlike the U.S., countries in the European Union don’t have an embargo against Cuba.

“Europeans have access to Cuban cigars,” Benjamin said. “All of the big cigars originally came from Cuba. The history is just there.”

But European tobacconists sell both Cuban and non-Cuban cigars. So why are the latter more popular? It’s all about perception.

“Ask anyone in Europe what the best cigar is and they would say Cohibas, even though they may have never seen one. Or never smoked one.” 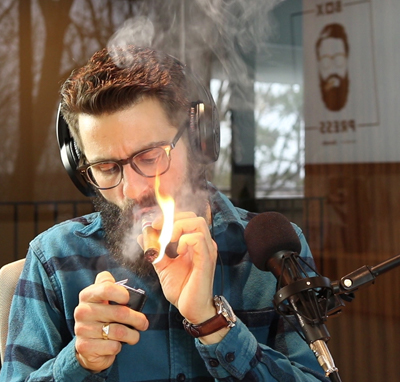 When non-Cuban cigars enter the European market, their price points play a huge role whether or not those cigars are going to succeed. In Europe, bigger ring gauges fetch 15-20 Euro (18-25 USD). “The magical price point is around 10 Euro,” Benjamin said. “For every non-Cuban that comes in above 10 Euro, it’s tough.”

“If someone is going to go into a smoke shop to grab something, he’s thinking, ‘If a cigar costs this amount, I might as well just grab a Cuban,’ ” Rob added.

“But in the U.S., when new brands come in, we want to try them, along with boutique brands.”

“We have people who are curious about new cigars,” Benjamin said. “It’s just different. European cigar smokers are more conservative smokers. People were brought up with Cuban cigars.

“Just from an historical standing, to a European, a Cuban cigar is the epitome of luxury. And Cuban tobacco is fantastic, especially in a well-aged Cuban cigar.”

Which Cubans should you sample when traveling in Europe?

MUST-TRYS OFF THE BEATEN TRACK

With non-Cuban cigars, additional aging is a personal preference, not a necessity. Cigars hailing from the Dominican Republic, Honduras and Nicaragua are made from aged tobacco. To remove its ammonia compounds, all tobacco needs to age. Usually that takes 1-3 years. Sometimes cigar makers age tobacco for 10+ years, Benjamin said.

If you’re a cigar enthusiast willing to hold off, aging can make a great cigar even better. Like with wine, cigars need a body to age. Therefore, not every stick has what it takes to age well. Thus, mild cigars don’t age well. Rule of thumb: the more ligero, the higher the aging potential. And more of an opportunity to change a cigar’s aroma over time.

You’ll get the most bang for your patience if you age thicker cigars. Why? The larger the ring gauge, the greater variety of tobacco leaves. So aging will release some wonderfully complex flavors within the blend.

With Cubans, the responsibility of aging falls on the shoulders of the cigar collector. Standard Cuban cigars are normally boxed within 12 months after harvest, so their tobacco hasn’t fully aged. Nor are they aged inside their boxes at the cigar factory. So off the shelf, improving Cubans is your job.

How do you properly age Cuban cigars?

Best to keep them in their original box and slide them with Boveda into an airtight Tupperdor or Boveda Humidor Bag. Because Cubans often absorb more moisture and perform better at a slightly lower humidity level, we recommend Boveda 65% RH for Cubans, Dominicans, Puros and cigars with thicker, oilier wrappers like the Opus X or a broadleaf Maduro.

MYTH #3: CUBAN CIGARS ARE STRONGER THAN OTHER CIGARS

Tobacco is cured to lose all the byproducts that come from the fermentation. Fresh out of the drying barn there is a lot of ammonia.

“If you go to a cigar factory and into the curing and aging rooms, the aroma is really overwhelming,” Benjamin said.

Those strong smells and flavors aren’t given the time to mellow out in a Habano. As a result, freshly rolled Cuban cigars are intense and spicy. And tobacco that comes out of Cuba tends to be a bit stronger with more nicotine. “When you retrohale, the punch through your nose is the nicotine kicking in,” Benjamin explained.

“But there are perfect examples for very strong cigars out of the Dominican Republic or Nicaragua as well. Just three words: Ligero, Ligero, Ligero!”

Nowadays, it’s not unusual to find high priming wrappers on cigars from those regions as well. A higher priming wrapper hails from a higher part of the tobacco plant and yields a fuller body and richer flavor. 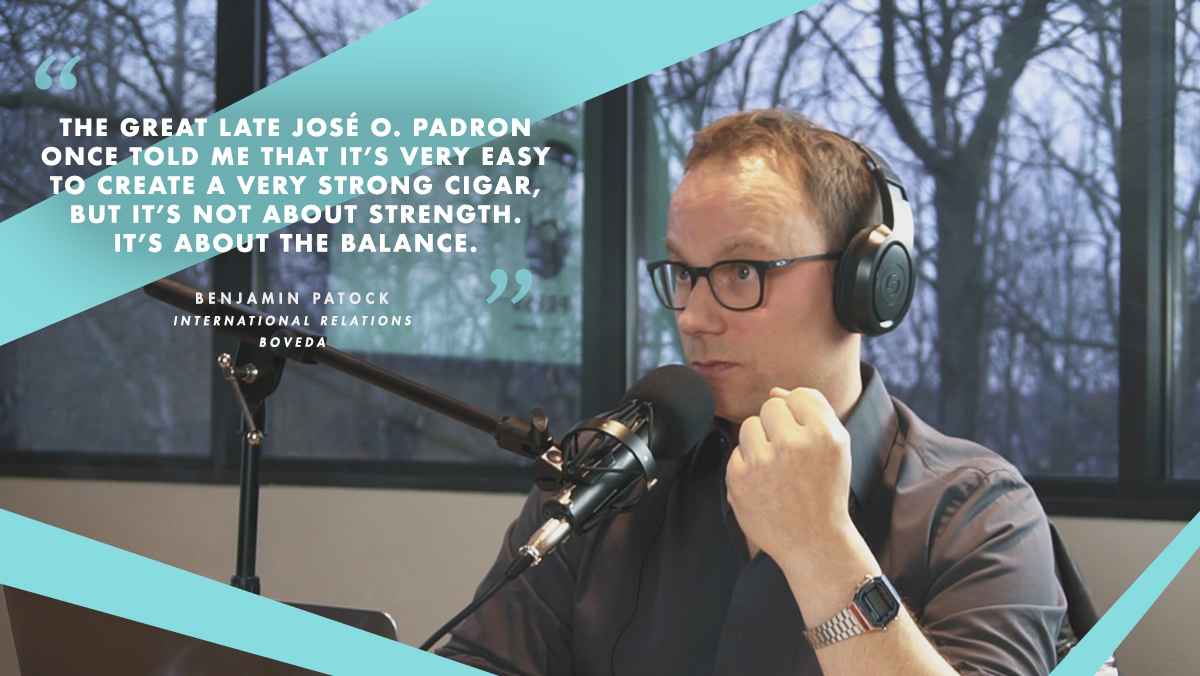 Light wrapper versus dark wrapper—doesn’t matter. The strength doesn’t come from the wrapper.

“The color on the outside doesn’t depict what’s going to happen with the strength of the flavor profile of the cigar when you smoke it,” Rob explained.

Find out what pleases your palate before that next momentous cigar-smoking occasion. Pay a visit to a local smoke shop to talk to a tobacconist. To find a smoke shop near you, check out these Boveda retailers.

Snap up An Illustrated Encyclopaedia of Post Revolution Havana Cigars by Min Ron Nee if you can find it at a used bookstore or tag sale.

GOT A QUESTION FOR Rob? | Use #AskBoveda on Social Media

Should you rotate your cigars in your humidor?

With Boveda’s 2-way humidity control in your humidor, there is really no need to rotate your premium cigars. (Unless you find rotating your cigars in your humidor enhances their flavor.)

Boveda works by slowly and precisely releasing and absorbing moisture to maintain a steady RH level in your humidor. To make sure humidity is evenly distributed, Boveda pushes moisture around the open spaces that surround your cigars. When your humidor or its trays are chock full of cigars, you should make way for Boveda’s moisture to move around. So either leave some room around your cigars or position Boveda throughout your humidor—on the bottom, on the lid and among your cigars. Remember you can never use too much Boveda. Using more Boveda makes it last longer and work more efficiently.