Over (or with?) a Neanderthal, hear how craft generates craft at RoMa Craft Tobac, maker of small-batch, super-premium cigars. Boveda herfed with its co-founders/owners Skip Martin and Mike Rosales in Austin, Texas. Learn the origin stories of the CroMagnon, the Femur and Weasels, too.

But the talk with Mike and Skip is more than just blends and binders, such as:

With its new Mexican San Andrés tobacco, this intense smoke is even better than before. And in 15-count boxes, definitely more attainable—only not in the U.S. The three latest vitolas weren’t released stateside. (Instead try the original Neanderthal HN, HoxD, OM or SGP.)

RoMa Craft Tobac: where CroMagnons co-exist with Neanderthals. This super-premium cigar company was launched in 2012 by Mike Rosales and Skip Martin. The company name is a mash-up of the first two letters of each owner’s last name Rosales and Martin. (RoMa, how crafty!) 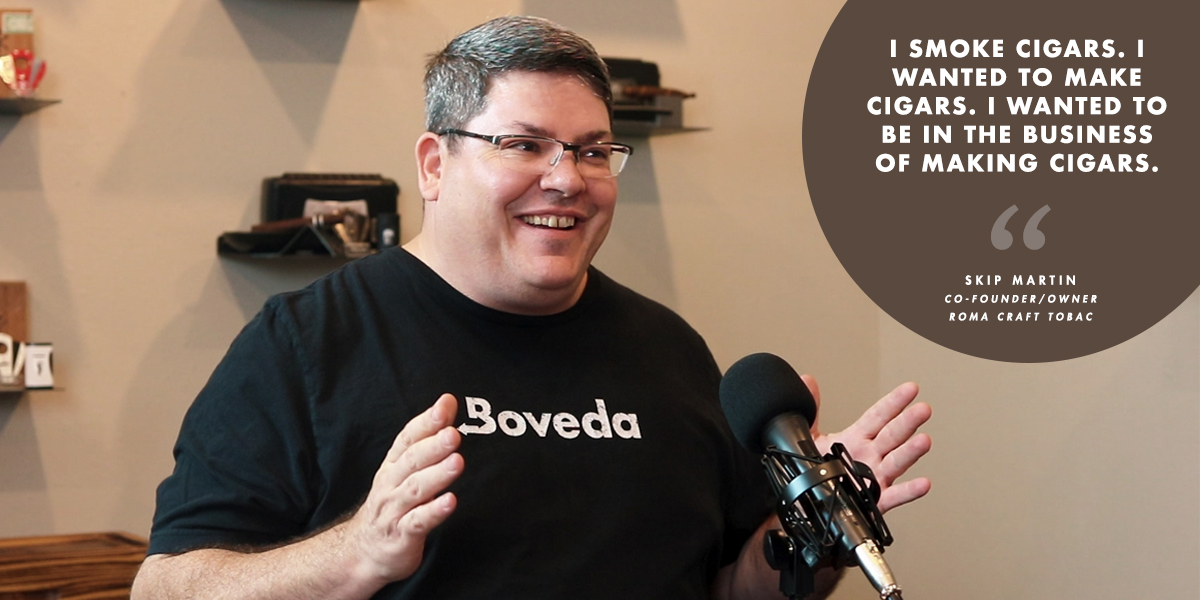 Cigar lovers covet RoMa Craft smokes. Because in a way, every run from this small-batch cigar maker is limited edition. RoMa Craft makes between 5,000 and 6,000 cigars a day. Or about 1.2 million cigars a year. (Lighter, please.)

By comparison, “Drew Estate probably makes more cigars in one day then we make in 2 months,” Skip said.

RoMa Craft blends many types of tobacco into their brands, which include Intemperance, CRAFT, Wunder|Lust and Aquitaine along with those CroMagnons and Neanderthals. The company is known for coming up with unique tobacco combinations, such as using broadleaf with Cameroon. But it’s not just the blends that make RoMa Craft noteworthy. A lot of it is in careful construction—how much of each tobacco is used and in what order under that luscious wrapper. 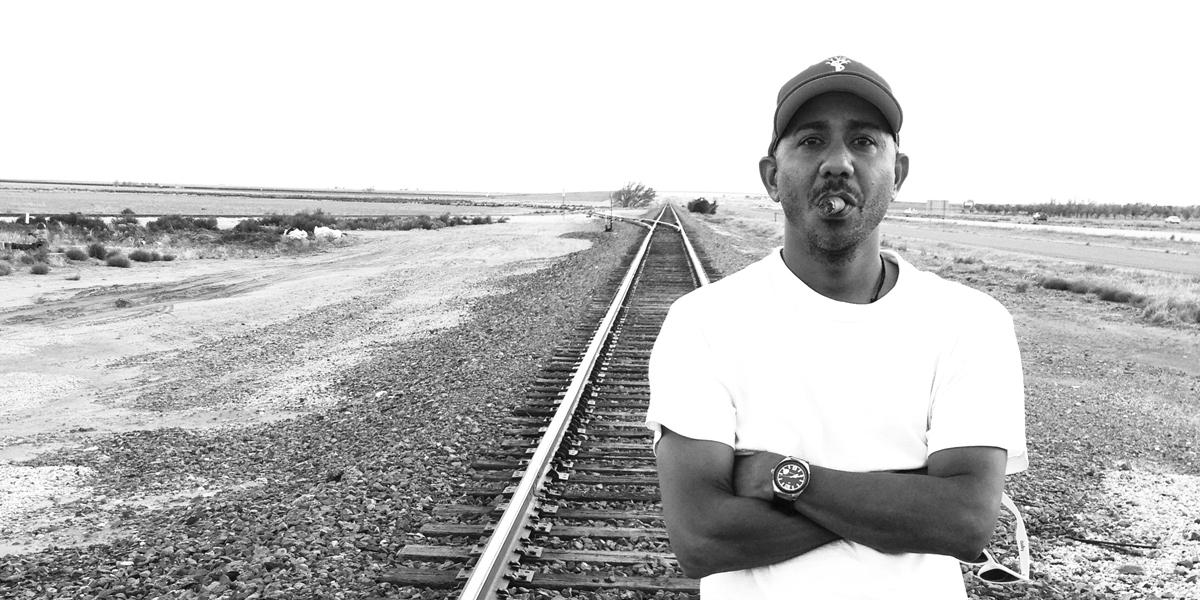 3 PERSPECTIVES.Skip does well with strong flavors. Mike does the mild to medium end. And factory manager Esteban Disla (pictured) can predict what a tobacco will be like in six months based on what that tobacco is like today.

Skip explained that he and Mike personally source RoMa Craft’s tobacco. Some years, there may be a very limited amount of high-quality broadleaf. In other years, there might be none. It’s the availability of this premium tobacco that defines how many cigars the company produces.

Some cigar manufacturers make higher-end cigars profitable by producing mid- to low-end cigars, which cascade down in quality. That’s why quality can vary so much within a cigar maker’s lines. Not so at RoMa Craft.

“No product is an afterthought,” Skip said.

Instead, RoMa Craft starts with premium tobacco. Builds the product. Smokes it for a while. Coins a name. Creates the artwork, wrapper and box. RoMa Craft packaging is high quality, too—from the texture of the paper to the raised lettering.

Yet it’s a long process. There are many aspects that affect how a cigar tastes and performs, Skip said. “Everything from the farm, the curing barn, the fermentation, the aging, the production, the physical construction and packaging process.”

HIGH-QUALITY WITHOUT HOCKING YOUR HUMIDOR

This attention to detail should have cigar aficionados reaching deep, very deep, into their pockets for such a well-crafted smoke. To keep its cigars affordable, RoMa Craft works smarter. Their processes are efficient, so there’s little waste of time, movement and materials.

“We’ve always tried to be super transparent in what we do, so we can show what that value is, Mike explained. “The bulk of our stuff is at the $7 to $8 price point.”

CIGARS: May their price be nice and their quality high. (And they stay ever fresh with Boveda.)

Although the company is headquartered in Austin, Texas, its production operations are in Nicaragua. Hands-on, operation-minded Skip calls Nicaragua home about 9 months out of the year.

Those million plus cigars? All made by only 12 pairs. Teams of two work together to hand roll the long-filler premium cigars. One bunchero. One rollero. (Only in Cuba is one person responsible for both jobs, Skip explained.) 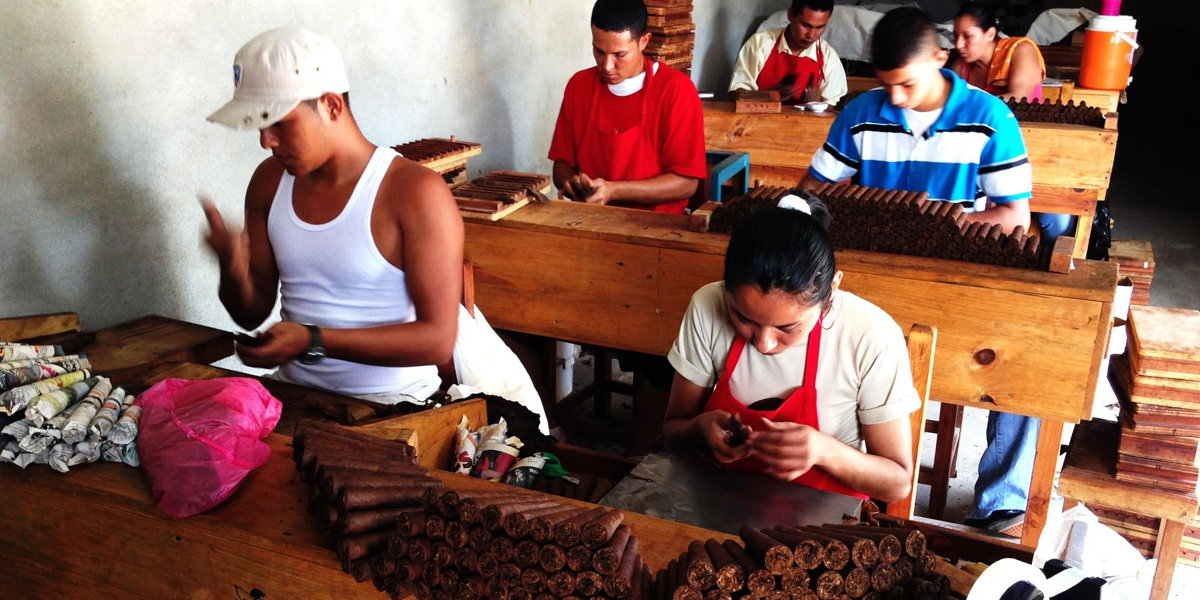 Now in many big cigar factories each of these specialists spends weeks and weeks—if not months—working on only one thing. Every day. All day. Then after 10 or 15 years, that person could move up to a more prominent job on the factory floor.

“… on Monday or Tuesday [they] may be are working on 6X54s in Cromagnon. And then Wednesday and Thursday, they may be working on 5×50 Perfectos in Intemperance BA,” Skip explained.

Switching from these different sizes and different blends is a specialized skill set. “One of the things we really focus on is retention of our people,” Skip said. “Of the 75 or so people we’ve ever had working for us, we have one person in the states and eight people in Nicaragua who no longer work for us.”

Cigar smokers (and companies) often romanticize tobacco and cigar making. But for people in Estelí, which is touted as the cigar capital of Nicaragua, cigar making is in their blood.

It’s similar to growing up in Pittsburgh in the 1950s. It was a steel town. Your dad worked in steel. Your brother and sister did, too. In some fashion, everyone either worked in steel or supported that industry.

Skip explained that cigar making is a good trade job. “In fact, rolling cigars, if you’re really good at it, you can make as much as a lawyer or a doctor in Estelí.”

From the founders down, the people behind RoMa Craft cigars see they all play a role in making an artisan product. There’s an emotional connection to creating something by hand. It’s the physical manifestation of passion. A passion for premium cigars. 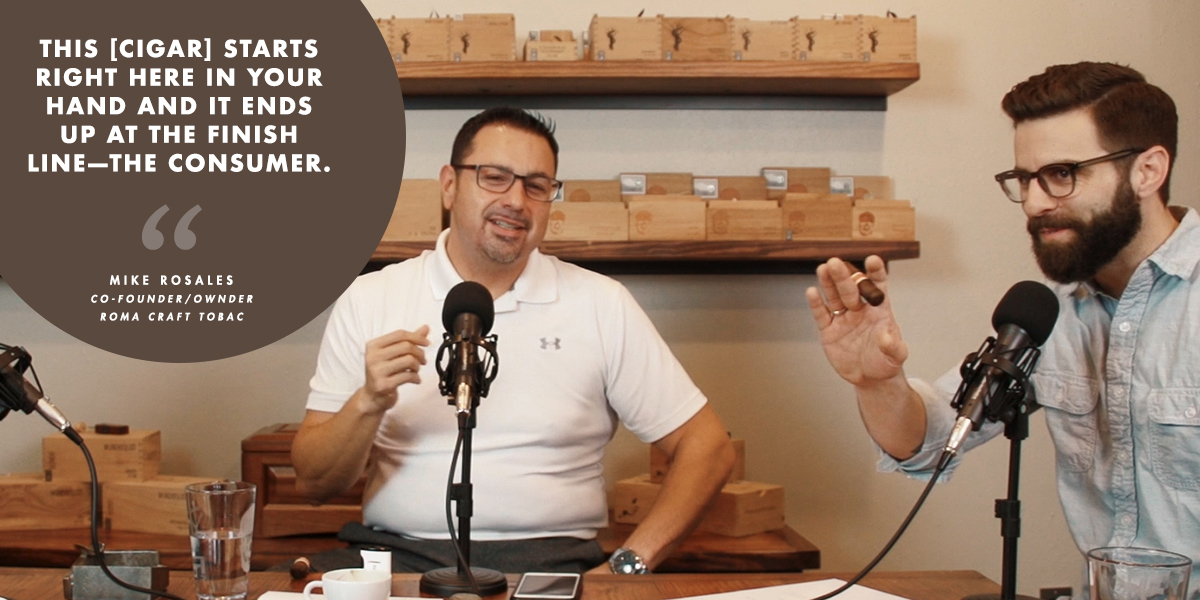 Both Skip and Mike recognize they are as much in the people business as they are in the cigar business. After all, there are people behind every cigar. And those people celebrate births and graduations as well as experience deaths and set-backs.

“Life events [of the people who work at RoMa Craft] are as important as picking out tobacco,” Skip said.

It’s not just the people behind RoMa Craft who’ve bonded over the brand, it’s also cigar consumers. Social media has been a great equalizer for small-batch brands. It allows companies that are RoMa Craft’s size to reach a lot of people.

In lieu of investing in ads in industry pubs like Cigar Aficionado, brands like RoMa Craft can engage directly with consumers inexpensively via social platforms. Upwards of 15,000 RoMa Craft fans follow the Instragram or Facebook feeds.

And those people connect with RoMa Craft in a very genuine way, Mike added. They’ve cultivated one-on-one relationships with many consumers. As cigar lovers, there’s already an instant connection.

Followers—even other cigar makers—drop into the Austin headquarters from all over the world to experience firsthand the cultural that Mike and Skip have created.

ARE YOU A CIGAR WEASEL?

Some of the more fervent RoMa Craft fans call themselves Weasels. Skip said he thinks Brian Hewitt, co-owner and co-author of the Stogie Review, originally popularized the moniker. (But RoMa Craft trademarked it and the Weasel image.)

Weasels are in the game of weaseling cigars from kindred cigar lovers—at shows, at herfs, at lounges, wherever. Both Skip and Mike fancy themselves as expert Weasels. But the term Cigar Weasel has both positive and negative connotations. Be prepared for both.

ENCOUNTER WITH AN OPPORTUNISTIC WEASEL

Sounds like: “Hey, what you smoking? Oh man, I didn’t bring my travel humidor, what do you got?”

Response: Carry a separate travel “weaseldor,” which you stock with cigars that other people give you that you’ll never smoke. Re-gift.

ENCOUNTER WITH A GENUINE WEASEL

Sounds like: “I can’t find RoMa Craft anywhere.” (In the beginning, engaged RoMa Craft fans would have to beg and borrow to get the elusive cigars, which are still only carried by select brick and mortars.)

Response: Give the guy a CroMagnon and help him evolve. 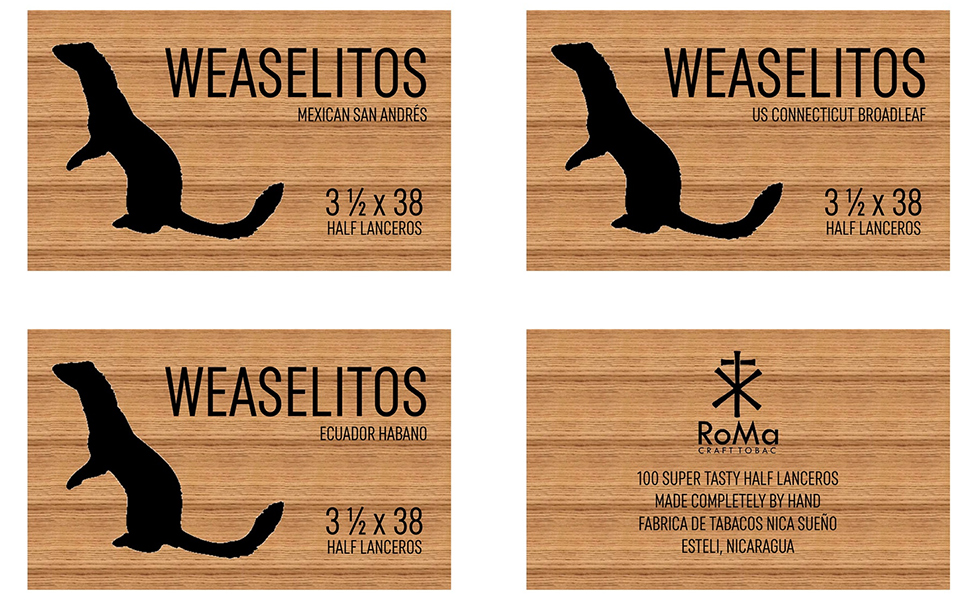 ATTENTION WEASELS: RoMa Craft’s new Weaselitos poked out their noses in Las Vegas at the 2018 IPCPR Convention and Trade Show. You can’t buy these limited-release cigars yet and their availability will be dependent on the availability of their Ecuadorian wrappers. Stay tuned!

Think of Skip. Think of Mike. Think of Esteban and the dozens of other artisans who create the cigars in your humidor. Protect their craft with Boveda 2-way humidity control. Boveda is the precise way to guard against cigar damage caused by too much or too little moisture. Art is worth preserving, use Boveda.