Southern Draw Cigars are on fire! And it’s not just about the premium smokes from this Texas-based, Nicaraguan-made cigar company. Watch Southern Draw founder Robert Holt get personal about why doing good is just as important as creating good blends. And why integrity matters in business.

“Over the last four years we really came out of nowhere.”
-Southern Draw founder Robert Holt

Robert is an engineer by trade. Before launching this super-hot cigar company, Robert spent a decade or so in the telecom industry. The job took him to Central and South American. Many of the workers were from Cuba, the Dominican Republic, Honduras, Nicaragua and Ecuador. All cigar hotbeds. So it was tobacco, as well as telecom, that spurred talk among the diverse group. (Cigars have a way of bridging differences, yes?)

When Robert returned stateside, he’d discuss the struggles of the local people with his wife Sharon. The locals’ humility. Their hard work ethic. Their lack of basic needs.

The couple talked about creating a company that could be a vehicle to do good. A vehicle to take care of a few people. Robert and Sharon wanted to put their energies toward an industry that created skilled, stable jobs.

Enter premium cigars. Robert needed to educate himself on how a cigar company worked. The engineer in Robert reverse engineered the making of a cigar. Why proper humidification is so important to premium cigars. What are the different characteristics of different tobaccos. How tobacco goes from farm to fermentation to blending. And all the other steps along the way.

As with many a great brainstorm, the name of the company was conceived on a cocktail napkin with a Sharpie. Initially Robert wrote down Southern Drawl. And then reconsidered—too regional, too slow.

“But then I thought about the science of a cigar. What’s my biggest complaint? When I smoke cigars I’m like—it doesn’t draw. And so I dropped the ‘L,’ ” Robert said. And thus, Southern Draw was born.

The company’s cigars are hand rolled by Tabacalera AJ Fernandez Cigars in Estelí, Nicaragua. Robert promises a perfect draw from his cigars. Southern Draw cigars are even draw-tested to exacting standards.

Southern Draw’s first line was Kudzu (pronounced kud-zoo). Kudzu is an invasive vine that was brought into the United States from southeast Asia in the 1800s to combat soil erosion.

“It’s known as the weed that invaded the South,” Robert said. During his military career, Robert was deployed internationally to a lot of unsavory areas. When he returned home, kudzu was a welcomed sight. Invasive or not, it’s a part of the South. 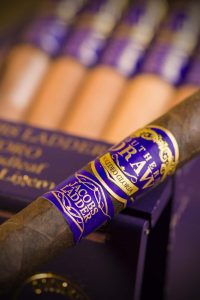 Subsequent Southern Draw cigar lines honor people who have influenced Robert. Most importantly is his wife Sharon, the inspiration for Southern Draw’s Rose of Sharon cigars. He credits Sharon with being the most calming influence of anyone he knows—and that’s after 23 years together. Sharon is also his right hand at the cigar company.

Another biblical reference, Jacob’s Ladder harkens to his son Ethan Jacob. “He is a big, strong, strapping young lad of 17. He’s the embodiment of this blend. He also has these sweet notes. Big but approachable,” Robert said.

In this episode of Box Press, Robert and Rob are smoking Southern Draw’s Jacob’s Ladder.

At the 2018 IPCPR Trade Show, Robert and Sharon unveiled their fifth cigar line. They honored two early supporters of Southern Draw, Phil and Shelly Hogan. Although the brand new core blend is called Cedrus, it’s only rolled in a single vitola, The Hogan. Robert said Cedrus is Southern Draw’s “most distinguished tasting cigar.” Four varietals make up the filler.

NOW LET’S GET TO THE REST OF THE GOOD STUFF

Robert said, “It’s the subtle differences that make each cigar company unique and different. It’s the one thing that we can do different and better.”

Southern Draw does better by sharing its success. Through its new IGNITE program, Southern Draw and the cigar retailers who carry the limited-release cigars will donate a portion their sale to a select organization that aids service men and women.

It’s Robert’s creative way of giving back while abiding by the U.S. Food and Drug Administration’s charitable giving guidelines. (Since August 2016, FDA regulations prohibit cigar companies from the decades-long tradition of donating cigars directly to charities.)

Only 1,000 10-count IGNITE “humijars” were released—500 black and 500 white. Cigar lovers can choose between either jar filled with either blend, Southern Draw’s Kudzu Oscuro Perfecto (shown) or its Firethorn Habano Rosando Perfecto. Boveda donated its patented 2-way humidity control to project the precious cargo in each humijar.

Robert debuted IGNITE’s first release during his interview with Rob Gagner on the Boveda Box Press podcast. The cigars were released at The 2018 Texas Cigar Festival, an annual event in Houston sponsored by Casa de Montecristo, a national brick and mortar cigar lounge and retailer.

Both Southern Draw and the retailer will give $3.75 for each humijar sold to Operation: Cigar for Warriors. OP: CFW sends premium cigars to active duty military in combat zones. Boveda also contributes humidity control for cigar care packages shipped by OP:CFW cigar. Learn about Boveda and OP:CFW.

“As a veteran myself, I would have loved not only to get a cigar but to get a good cigar, a new release cigar,” Robert said.

“In a military environment there’s a lot of structure. A lot of demands of your time,” Robert said. “This [a cigar] is the one way you can sit back and relax—whether you’re sitting on the hood of your Humvee or the back end of a Blackhawk helicopter on the carrier deck. Maybe you’re alone. Maybe you’re with a friend. Maybe you’re writing a letter home. To be able to sit down and have a cigar for 30 or 45 minutes or an hour—it’s a nice escape.”

HAND UP, NOT A HAND OUT

The giving continues beyond Southern Draw’s IGNITE line. At the 2018 IPCPR, the company also launched 300 Hands cigars (300 Manos, in Spanish).

Cigar makers say it takes 300 hands—from seed to stick—to create one hand-rolled cigar. Southern Draw’s 300 Hands project draws attention to those unnamed laborers in the cigar industry. Sales will provide charitable relief to the people who make the Holt’s products possible. Call it a company tithe.

When they travel to Nicaraguan, the Holts do so with “boots on the ground.” They get to know the  people on the farms, in the fields in the aging rooms and on the rolling floor. Personal connections led to people opening up about hardships in the country and the community. But the people didn’t ask for anything for themselves. Everyone had a concern about somebody else—a co-worker who needed a bicycle to get to work, a mother who required healthcare. Story after story. Requests to help another.

Profiles culled from these conversations ride along with 300 Hands cigars. Comfortable fit with the rest of the good coming out of Southern Draw, including darn good smokes.